The never too late tour 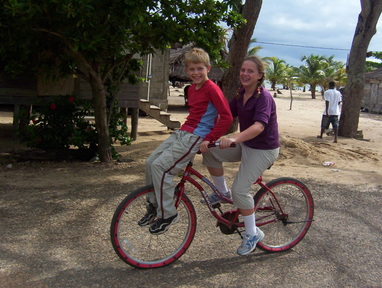 The kids fooling around while on a kayak trip to Belize.
We live in the beautiful, coastal-mountain town of Squamish, BC and have been here for the past 18 years,– the longest we’ve ever lived in anyone place. We are keen outdoor recreationists and love to mountain bike, road ride, hike, trail run, ski tour and paddle  (sea kayaking or canoe). We are blessed in that we can do the above out our ‘backdoor’. We also love to explore BC and the western US to experience the outdoors in other locales.

We have two grown kids. Nina, our eldest, recently graduated from the University of Victoria with a degree in Geography. Nico is in the midst of an engineering degree at UBC with a minor in commerce. They have been blessed growing up in a supportive community, surrounded by capable, out-going peers with endless opportunities for self-expression and recreation. We are proud of them both. 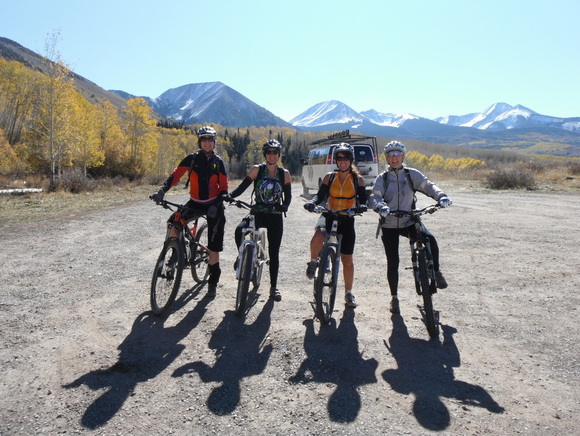 Claire (far right) on a riding trip to Moab with her best buddies - the Gang of Four.
Born in 1956, Claire grew up in a typically large Quebecois family. Being the middle child of eleven siblings she is determined and resourceful  Claire obtained her Registered Nurse designation and immediately set off to broaden her horizons. She did hospital nursing stints in Quebec City, Ottawa and Switzerland. In 1980, she was offered a short term posting working in refugee camps on the Thai-Cambodian border at the height of the genocidal reign of terror of the Khmer Rouge regime. This was the beginning of a twelve year involvement in international relief and development projects. Her second assignment took her to Djibouti to work in refugee camps serving Somalis fleeing the drought and insecurity that was ravaging the horn of Africa (and the insecurity persists). She then studied tropical medicine in Belgium for 6 months before returning to the Thai-Cambodian border. Between these postings Claire managed to squeeze in travels to many countries. It was on a stop-over in Vancouver where she wanted to check out doing a degree at UBC that she met Jim and began the next phase in her life. 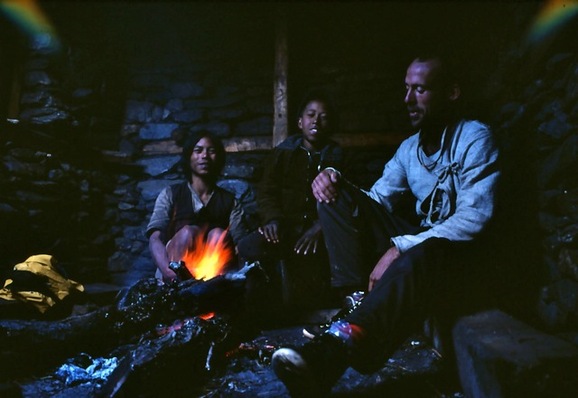 Jim's favorite photo. Hanging out with the porters in Nepal in 1980.
Jim grew up in a rambunctious household of four boys and an elder sister in the west island of Montreal and in North Vancouver.  Jim’s academic career peaked in Grade 3 and from there on his interest flagged.  At sixteen he quit school, packed his rucksack and headed north to find his fortune, which to this day, alludes him.  Working assorted jobs (forest fire fighting, ditch digging, clearing logging slash, railroad tie gang) he earned enough to travel south to Mexico eventually returning to Vancouver under sketchy circumstances.   Seeing the light, Jim returned to night school to get his high school leaving certificate and managed to get in to Simon Fraser University which started a rather lacklustre 3 year attempt at obtaining a degree.  More interested in reading Russian literature than following a curriculum, Jim abandoned academia and began what has become a lifelong involvement in residential construction.  Jim loved the physicality and sense of accomplishment inherent in structural carpentry and soon progressed from lowly site carpenter, to crew boss to starting his own framing company at 21 years of age.  Making money never being the priority, Jim was just as likely to be pursuing some outdoor interest (rock climbing) or travel adventure as building his business.  After a particularly profitable framing contract Jim took off on a long sojourn through Asia.  Not long after returning to Canada Jim was planning a climbing trip to South America when he met Claire and life took another trajectory. 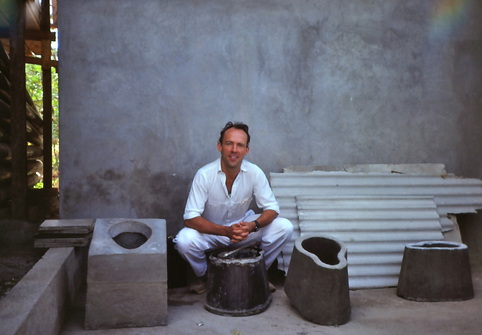 Jim demonstrating his new latrine model for a Potable Water and Sanitation project in Nicaragua.
Jim and Claire lived together for two years in North Vancouver while Claire completed her BSc in Nursing, improved her English and started learning about an outdoor lifestyle with Jim as (dubious) mentor.  Meanwhile Jim, tiring of building other people’s designs, started his own residential design company.  Somehow his self-confidence convinced clients to let Jim design and build their ‘dream’ homes.  It was a heady time.

In 1985, they both got postings with the ICRC in Mozambique.  After a flurry of activity for Jim to finish contracts, Claire to learn advanced first aid and for the both of them to learn Portuguese (the lingua franca of of Mozambique) plus get married they were off to Portugal for a brief honeymoon and then start a ten year, joint career in relief and development.  Postings in Mozambique, Nicaragua, Angola and Zimbabwe provided challenging, sometimes very frustrating but always interesting work experiences.  Learning new languages, dealing with insecurity (three of these countries were in civil war during their stays) and working with limited resources/support all require resilience, common sense and a strong work ethic.  Nina moved with her parents to Angola when she was four months old and the year that followed was a harrowing affair with numerous medical emergencies.  The family transferred to Zimbabwe, just prior to the resumption of hostilities in Angola, where relative calm prevailed.  Nico came into this world in Harare but a short two years later, Jim and Claire left Africa behind to resume a more stable life with kids in Canada. 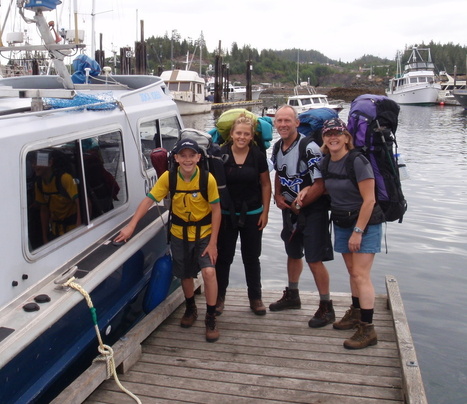 Jim, Claire, Nina and Nico getting ready to trek the North Coast Trail of Vancouver Island.
The past eighteen years in Squamish have been peaceful.  It has been a wonderful community to raise children.  Jim’s home design business (www.jimharveydesign.ca) has grown in fits and starts in accordance with the local economy and has now reached a level where a steady living can be made.  They also ran a B&B out their beautiful home (www.coneybearelodge/glypic.net) for five years but it started to take too much time away from family and recreation so they closed in 2006. Claire has transitioned to working as a psychiatric nurse and currently works with a wonderful team, providing community psychiatric services out of the Hope Centre at Lion's Gate Hospital in North Vancouver.

But after 18 years, the kids are independent (more or less) and it is time to change things up…